This is a list of public sites. Warning: not all sites are accessible at all times.  Be sure to get permission before going to cemeteries.


If you have an active haunted site that you would like to have investigated by our professional reserch team please contact the QUEST Investigation Group at 816-833-1602.  We do not charge for investigations, but do as permission to use the information we obtain in books or other media.

Margie Kay is the Director of Quest Paranormal Investigation Group and author of Haunted Independence and Gateway to the Dead.  She is the publisher of Un-X News Magazine.  Visit www.margiekay.com or www.unxnews.com for more information.
Posted by Margie Kay at 6:22 PM No comments: 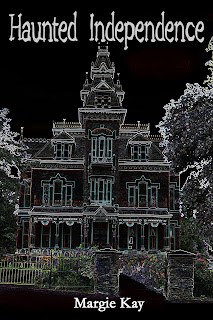 
Vaile was a successful abolitionist lawyer, cattle rancher, investor, and landowner. The mansion has 31 rooms, 9 Italian marble fireplaces, running water, and beautiful painted ceilings, and has been fully restored to its original splendor.


The ghost stories about the Vaile evolved around different time periods and events. The first event was when Mr. Vaile was accused of mail fraud and sent to Washington for a trial. Even though he was acquitted, Mrs. Sophia Vaile, despondent over the accusations, took an overdose of morphine and died in the home in 1883. Others believe that she may have died from stomach cancer, but that was a taboo subject at the time and may have been the reason for the suicide tale.


Reportedly (but not confirmed) Mr. Vaile could not part with his dead wife so he had her buried in the front yard with a glass cover over the coffin so he could visit her. Protests from neighbors later resulted in the removal of the coffin to another location nearby.

Colonel Vaile died five years later. He never remarried. Sophia Vaile has been spotted looking out of the upper floor windows by passersby and inside the house throughout.


The mansion was turned into an Inn after Mr. Vaile’s death in 1883. The Vaile Pure Water Co. was operated from the site until just after the turn of the century. Later, the home was used as an asylum and sanitarium for approximately 10 years during the early 1900s, and as reported by an ex-worker, the heavy metal cages where people were kept are still in the basement, however, another worker told me this is not the case and no cages exist.  The home was used as a nursing home for a half century or longer, and according to one staff worker hundreds of people died there. The staff does not like to visit the basement because strange noises and an ominous feeling occur there. The Vaile Mansion also served as a rest home, so one could assume that other people died here.


The mansion was purchased by Roger and Mary DeWitt in the 1960’s, and after the death of Mrs. DeWitt in 1983 it was donated to the citizens of Independence.

Spirits and ghostly activity have occurred over the years in several rooms in the house, on the grounds, and in the neighborhood. Some passersby walk on the opposite side of the street in order to avoid an encounter with a ghost. Neighbors report seeing a ghostly specter walking on the sidewalk and in the front yard of the property.


The third floor is now off limits to the public (perhaps due to pesky spirits) but during my visit on this floor some years ago with my husband, I sensed the presence of at least two spirits. One, a male spirit, was sitting by the back window, but as I stepped into the room, he slowly faded away. A second dark outline of a person stood in a corner for several minutes, seeming to watch our movements. This entity did not move or fade out, and remained as we left the room.  The reason the third floor is not a part of the tour is due to fire codes. The city was informed that they would have to install a fire escape if tours were to include the top level.

The staff also reports seeing imprints of someone sitting on the freshly made beds in one second floor bedroom when no one has been in the room.

So whether you are seeking spirits or not, it is worth taking a tour of the mansion.

Margie Kay is the Director of Quest Paranormal Investigation Group and author of Haunted Independence and Gateway to the Dead.  She is the publisher of Un-X News Magazine.  Visit www.margiekay.com or www.unxnews.com for more information.

Posted by Margie Kay at 5:14 PM No comments: