Old site of the Swope Mansion

The old Swope Mansion used to be located at 308 N Pleasant Street, Independence, Missouri, but was razed by the RLDS Church after they purchased the property in the 1960's.  One can speculate why this beautiful red brick mansion was taken down, but it may be due to the fact that it was very haunted, and in fact, the location still may be haunted.  Col. Thomas Swope was murdered in the home by poisoning, and later 10 or 11 family members mysteriously died with the cause being reported as Typhoid from a contaminated cistern on the property.  See the book Deaths on Pleasant Street: The Ghastly Enigma of Colonel Swope and Doctor Hyde by Giles Fowler for more details. 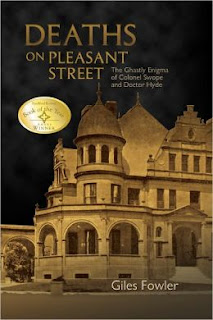 Here is the book description from Barnes and Noble:  "The 1909 murder case surrounding the wealthy Swope family of Independence, Missouri, gripped newspaper readers throughout the nation. This book gathers the facts behind the suspicious fates of three Swope family members: the eccentric Colonel, millionaire donor of Kansas City, Missouri’s Swope Park, his affable cousin, and a young nephew and heir. The mystery pits the Swope matriarch against her disfavored son-in-law, Dr. Bennett Clark Hyde. Charged with poisoning the Colonel and suspected of multiple other attempted murders, Dr. Hyde endures national media attention for this crime of the century. The series of trials and appeals that followed explores the question: Was he a diabolical villain bent on inheriting Swope’s millions or the unfortunate victim of a family grudge? This account of gothic-era America follows streetcar tracks from the courtrooms of Kansas City to the typhoid-plagued Swope mansion in nearby Independence. The author delivers an engaging and accurate retelling of these 100-year-old events in the literary journalism tradition by analyzing court transcripts, newspaper coverage, and personal memoirs. Readers also get a new scenario based on modern science for what may have happened in the dark hallways of the mansion on Pleasant Street. "
Link to book

However, the tale may not be so clear as the book purports.  According to my father, my great-great grandmother, Nellie Collins Swope, was a very sinister woman.  The entire family believed that she killed all three of her husbands for their money, as well as 11 family members (who were they?).  She was so feared and hated for her cruel treatment by the family that my father's father, Boyd Kithcart, talked his brother (who had a brain injury from WWI) into killing his grandmother with an ax in order to protect the rest of the family from her.  They all lived in a large stone house on Charlotte street in Kansas City, MO.  He attempted to do so but failed, and was taken away to the St. Joseph Sanitarium where he spent the rest of his life until he died in 1968.  Boyd died in 1956.

It was known among the family members that Nellie was the 19-year old mistress of Mr. Henry Swope, and had her daughter, Minnie, out of wedlock.  After Mr. Swope's first wife died (how, I don't know) he married Nellie and then legally adopted his own daughter, Minnie.  They later had a son, George.  After Mr. Swope's death, Nellie married a man named Stephen March.  I don't know who the third husband may have been or if indeed there was one.

There are many gaps here, including the fact that I cannot find much information on Henry Swope, even after extensive research on Ancestry.com and other sites. Clearly, someone is hiding something.  I would like to get this cleared up if at all possible, and if you know something about the family I'd appreciate communicating with you.  I was able to purchase a photo of the mansion but the license will not allow me to use it in print or in a blog.   If you have a picture of it I'd appreciate getting a copy!

I was contacted by a former docent who worked in the Swope Mansion when they let people take tours after it was abandoned. Apparently, after the deaths the home was abandoned by the family and the City of Independence took possession of it.  The docent said that it was known among the staff that the house was very haunted, and that the workers often heard footsteps, doors opening and closing, doors locking of their own accord, and rustling of papers.  Col. Swope's office seemed to be the most active area and they would often find books on the floor of the office when no one had been in it.  Some workers even saw full body apparitions walking the halls.  No wonder, with 12 untimely deaths on the site.