The Lady in Blue at the Cafe Verona

The Café Verona on the Independence square in Independence, Missouri is sometimes visited by a Lady in a blue dress who is often seen sitting at a table by the front window. Patrons often think that this is just a person sitting there-  until she turns transparent and disappears in front of their eyes.   Often money goes missing from this particular table, so make sure you hand money to your waitress if you sit at this spot!  The employees and chef say that in the kitchen doors often open and close on their own, and they hear unexplained noises in the restaurant late at night. One chef even quit because of the ghostly activity in the kitchen, which got out of hand one evening. Apparently, the resident ghost doesn't like strangers in her kitchen.
Many people have reported seeing an older lady in a long blue dress who purposely spills alcoholic beverages that are left behind on tables after patrons leave the cafe.  Perhaps this ghost is a relic of the Temperance Movement.
--------

Excerpt from the book Haunted Independence Missouri by Margie Kay


I received the following e-mail from a man in 2006 which I just ran across again today and thought it would be a good idea to post it on the blog for everyone to see. The next time you go out to Burr Oak don’t go alone! The email is here, in entirety with no editing: 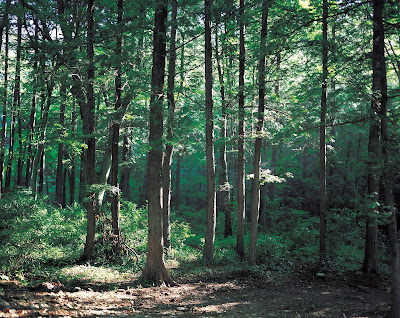 “Hello Margie:  I live here in eastern Jackson County. I heard your radio show today with you and those other ladies about ghostly apparitions and poltergeists activities and so forth. The show was interesting and thought provoking. I have an incident that happened to me about 5 years ago that I want to tell you about.

I have told very few people about this. Two of the people I told since thought I was not telling the truth or maybe I was seeing things and did not take me seriously. I was walking out at a State Park called Burr Oak Woods which I live near.

It was a very cold January day in 2001 and probably about in the nearly 20’s temp wise. I used to take long walks in the woods and I found it very relaxing. I was walking in some very dense forests in that park. After walking through a grove of big oak trees I came into a clearing.  Right in front of me was a man standing a few feet away from me.  What was strange- right away I noticed was that the man was standing with his back to me. I walked two more steps thinking he would turn and maybe say hello or something to that effect. But I immediately had a very strange feeling fall over me.

I sensed that there was something terribly wrong.  At that point I wanted to get away from him as quickly as possible.  So I started walking away from him, always facing him.  I was really a little scared at this point because he still had his back to me.  I kept on walking backwards until I got about 100 yards or so away from him.  All this time he was still there standing with his back to me.

When I got what I thought was a relatively safe distance away from him I put my binoculars to get a closer look at him.  As soon as I got the binoculars focused on him then at that time he turned around to look at me.  It’s as though he knew I was looking at him with the binoculars.  It was truly one of the most EVIL looking faces I ever saw on a human being. With two bad knees- I took off running and got out of the forest. One other thing that I thought was really strange: It was very cold and all this guy had on was a seemingly thin pair of slacks and a dark gray short-sleeved shirt. I remember the incident as if it were yesterday. Any thoughts or ideas as to what this might have been I would be grateful to hear. 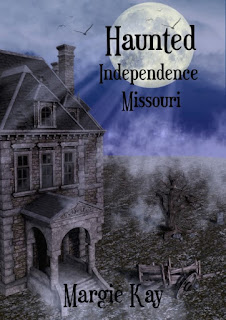 Just published this second edition today with updates - woohoo got it done! Now off to the next project...

Paranormal researcher and psychic medium Margie Kay presents many of the most haunted locations in the city of Independence, Missouri. She and the Quest Investigation Group team investigated these sites over a period of 20 years. In this second edition of Haunted Independence, Missouri Margie discusses cases involving businesses, parks, cemeteries, and houses that are haunted by loved ones, poltergeists, shadow people and even aliens.

ead about a haunted museum where a famous actress was born, a park with a dark shadow entity and the wife of the infamous outlaw Frank James, the lady in blue who haunts a popular restaurant, the lady in grey, and much more in this book.  Also included are a list of haunted atrractions in the area and places to go during the month of October when several locations open for haunted tours.

Be sure to visit Independence sometime - it is very haunted!

Posted by Margie Kay at 1:09 PM No comments:

The Haunted Chevy Tahoe that Moves on its Own

A vehicle in Sugar Creek, Missouri apparently has a mind of its own or is haunted by a spirit. The 2015 Chevy Tahoe, owned by Tarrence T. recently started acting strangely - but only when he talks about selling or trading in the vehicle.

The first incident occurred several months ago while Tarrence was driving down the street with his wife in the passenger seat. He brought up the subject of trading the vehicle for a larger pickup truck when suddenly the music he was playing stopped and the word "Message" scrolled across the screen of the radio. A few minutes later, the radio came back on and the message disappeared from the screen. The couple said that nothing like that happened before.


Video of ghost car moving on its own

On January 24, 2019 the vehicle again reacted to Tarrence and his wife, yet they didn't know about it until an hour later. The couple has a security camera system installed on their house with a monitor in their living room. Tarrence's wife decided to scroll back and look at the past couple of hours when she noticed the Tahoe suddenly move backward on the driveway. They looked at the time stamp and realized that the vehicle moved at that exact time they had been discussing selling the vehicle again.

The couple has ruled out any possibility of the vehicle having an issue that would cause it to move independently. It was in park and had been parked for hours on the driveway that has a very small slope before it moved. They checked for any recalls, and there are none. But that was not the end of the story - the exact same thing happened a week later when the subject of selling came up again!

After the three strange events occurred only while the couple discussed getting rid of the vehicle, they are of the opinion that it is just too coincidental and that the Tahoe just does not want to be sold.

Can vehicles have intelligence or is this one haunted by a spirit?  Who knows, but one thing is certain - this is a highly unusual set of circumstances.

Margie Kay owns UnX Media Publishing and is a paranormal investigator in Kansas City, Missouri. She can be reached at www.margiekay.com.

Posted by Margie Kay at 4:01 PM No comments: